Turkey is one of the leading tourism hot spots for exploring paradise.  Turkey continues to attract attention because of its unique bays on the southwest coast. Bays start from the north of Bodrum and continue all the way to Antalya, in between bays include Gocek, Hisaronu Gulf, Marmaris and Gulf of Fethiye.

These stunning bays that provide the blue voyage with peace and tranquility are protected by coastal law and maintain their virginity. These places have the leading names.

A blue cruise along Turkey’s turquoise coast includes some of the most pristine bays in the world. If you are looking for a relaxing holiday with natural beauty and laid back atmospheres book a blue cruise yacht charter in Turkey.

Gökgemiler Bay is an untouchd bay surrounded by lush trees. It is located close to the Kapıdağ peninsula in the district of Dalaman. Swim in the crystal clear water and enjoy the quiet and tranquil atmosphere.

Butterfly Valley is situated at the base of the famous Babadağ mountain just off the coast of Oludeniz. It got its name as for a few weeks a year in the height of summer the valley is full of butterflies and moths. Tiger moth butterflies can be seen here. As the valley is only reachable by boat it is one of the most untouched and natural spaces in the area. It offers lush green surroundings, white pebble beach, natural waterfalls and crystal clear waters. Apart from the many species of butterflies that populate the valley, it is sometimes occupied by backpackers that sleep in tents and tree houses provided on the beach. Walk up the valley to the waterfall and stream. As long as strict guidelines are followed you can camp in the valley. It is the perfect location for a quiet and peaceful break.

Butterfly Valley is a popular stop for both daily boat trips and Blue Cruise yacht holidays in Turkey.

Bozukkale is a large bay located between Kale Burnu and Değirmen Burnu on the southern side of the Marmaris peninsula. Surrounding the port you will find the remains of the walls of the ancient city of Loryma.  Go ashore to the restaurants in the bay for breakfast, do not miss the fresh village bread, butter and honey.

In the early morning or late afternoon, when it is not too hot, follow the rough path up to the castle. There is a theory that the castle was built by Rhodian craftsmen trying to deny the harbourage to enemy fleets as its position is almost directly opposite the ancient Greek city of Rhodes. The defensive walls of the castle are impressive, made from stone blocks without mortar. 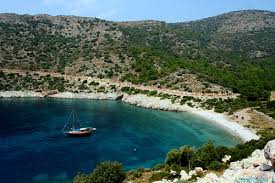 Akvaryum Bay is one of the most beautiful bays in the area, where the Aegean and Mediterranean seas meet on the Datca peninsula. It is the ideal spot for diving as the waters are so clean you can watch the fish and other sea creatures.

Büyük Çati Bay on the Gökova peninsula is surrounded by green hills. With no hotels or guest houses, Büyük Çati Bay is one of the most peaceful and tranquil in the area.

Cokertme Bay is in the Gulf of Gokova and is a popular stop for a Blue Cruise yacht charter in Turkey. Located between Kepce Burun and Karaburun the bay is also known as Fesiliyen Koyu or Vasilika. It is a sheltered bay, lined with pine trees and olive trees and, therefore, a popular stop for Blue Cruise yacht charter in Turkey. Go ashore and enjoy fresh seafood at the local restaurants.

Bozburun is a pretty village with a nice harbour. The coastline is rugged however there are plenty of places to stop and swim. Visit the mountain village of Bayir with its 2000 year old plane tree. On the north coast stop at Saranda and the waterfront restaurant called the Mermaid, it is a favourite for many visitors.

If you are lucky you may see turtles swimming in the bay at Kocatepe.

The entrance to Serce Cove if very narrow and can easily be missed, however, once inside the cover there is room for many boats. It is a well-sheltered bay from all winds. Serce Cover is located on the south coast of the Bozburun peninsula opposite the island of Rhodes.

In 1977 a sponge fisherman discovered a shipwreck in the cove. Research has found the ship to date back to the 11th century and was carrying glassware and the ship had departed from a port in southern Syria. The artifacts are on display in Bodrum Underwater Museum and are the most important Islamic glass collection known.

Yassicalar islands are a popular stop for blue cruise yacht charters in Turkey and daily boat trips from Fethiye and Gocek. Located in Gocek bay there are a group of islands and an ideal area for water sports enthusiasts and for hikers. Be careful when sailing around this area as there are some shallow areas between the islands.

Pine trees, calm sea and anchored boats make an unforgettable view. Eyup Özel says, "You can marvel at the Mermaid (Denizkiz) statue made in the cove, which was identified by Sadun Boro, the first Turkish sailor who made a world tour by boat. Take a stroll along Sadun Boro path".

Kabak Bay is located along the coast approx 15 km from Oludeniz. It is one of the most beautiful valleys in the area with the tree-clad mountains dropping down into the sea. It is a protected area and large hotels are not allowed. Kabak village is on the Lycian Way walking route between Fethiye and Antalya. Kabak Bay is one of the top camping areas in Turkey. If you do not wish to stay in a tent the are wooden bungalows and trees houses available for rent.

Gemiler Island was previously known as Aya Nikola and is also called Saint Nicholas Island. It is a small island, approx 1 km long and a few hundred metres wide giving you 360 degree views of stunning scenery.

Remains from the Byzantine era can be seen both on land and in the sea. Gemiler Island is thought to be the birthplace of Saint Nicholas (Father Christmas) or at least the place he and his followers used as a refuge to escape Roman persecution. The ruins you can now see, are a monastic retreat, several churches, other building and tunnels connecting the churches, were built by Saint Nicholas and his followers. The island is supposedly where Saint Nicholas was buried but his bones were removed and taken to Myra after the island was abandoned due to threats by the Arab fleet.

There is no fresh water on the island and it has to be transported there by boat. This may be why the traditional name for the island is Gemiler meaning Boat Island.

Gemiler Island is another popular stop on both the blue cruise yacht charter in Turkey and daily boat trips.

Turunc Pinari Bay is not far from Fethiye and is a popular stop for yachts with its clean dark blue sea. The name comes from the citrus trees and a fresh water fountain. It is possible to walk to Turunc Pinari Bay from Kaya Koy, a ghost town. The restaurants here are known for their fresh seafood dishes.